Valley of the Gods & Natural Bridges

After the Big Spring competition ended, I started making my way towards the Point of the Mountain in Utah.  Point of the Mountain is a bit of a mecca for hang glider and paraglider pilots, with two ridge-soarable ridges – the South Side, generally flown in the morning, and the North Side, generally flown in the evening.  There are also mountain site nearby.  I wanted to get a bunch of foot launch practice before the Dinosaur competition at the beginning of September.  Along the way, I planned to hit Utah’s six national parks.

After the somewhat ghetto RV park in Big Spring, I was ready to get back to more natural surroundings.  I couldn’t find any great options on freecampsites.net, but NM has some nice state parks and you can book RV sites online, so I set myself up to a night each at Lake Sumner and Bluewater Lake state parks. Both parks were very cool and somewhat deserted, just the way I like them.  It was a bit stormy at Lake Sumner, but nothing as bad as my Hurricane Bill experience in Sanger, TX. 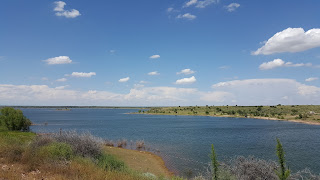 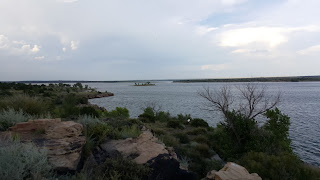 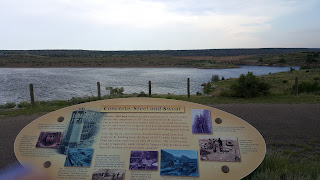 At Bluewater Lake State Park, I had booked a back-in site since that was the only option.  I thought it would be no big deal - a bit of a pain in the ass for just one night, but totally doable.  However, the campsite map was not exactly topographical and when I arrived I found out that the site I had booked was at the end of the road, almost parallel with the road with no real room to pull forward, and up a steep hill with a drop-off at a retaining wall.  Needless to say,  it took me several tries to back in to this one with no one to help guide me.  I eventually succeeded, but not before I put a nice-sized dent in the trailer.  Nothing that affects its usability, though. 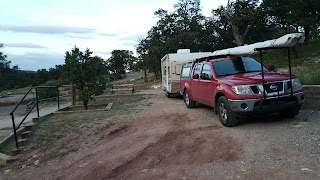 And what a lovely view from my campsite once I did finally get the trailer in there.  This would be a great place to spend a couple of nights, but for one night the hassle wasn't really worth it. 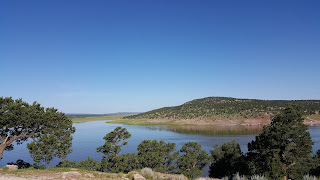 From here I set course for Bluff, UT, figuring I'd spend a night or two there and see Monument Valley before heading west for Zion National Park. Since my route was going to take me so close to the Four Corners Monument, I decided to stop and check that out.  How often can you literally be standing in 4 states at once?  It was really just a plaque on the ground and a 20-minute line to take a $5 photo, but at least I've checked it off the list. 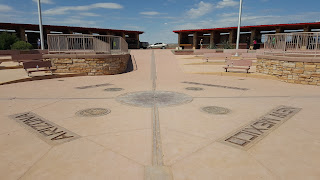 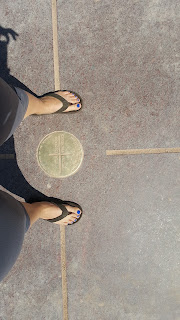 The town of Bluff consists of one gas station, three or 4 restaurants and a couple of RV parks & lodges.  The RV park was really just a gravel parking lot, but I just needed to dump my tanks and refill my freshwater tank so I wasn't bothered.  It's nice to be able to plug in and watch a movie on the DVD player anyway.  I had a bit of daylight left, so I hopped in the car and went to check out Goosenecks State Park - this is a park based at the goosenecks of the San Juan River.  What a beautiful place! 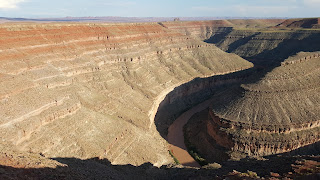 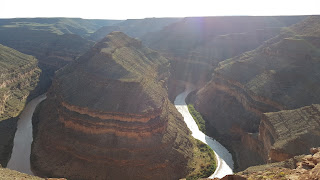 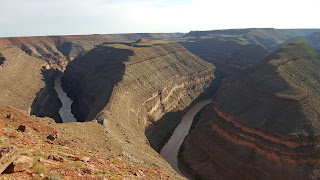 The next night I decided to go boondocking over at Sand Island, which is a Bureau of Land Management site on the San Juan river. I found a pretty easy back-in site right on the river and went exploring. 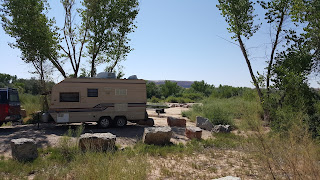 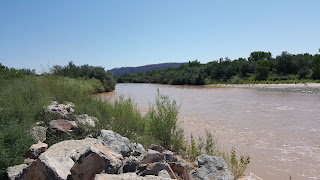 I drove through the Valley of the Gods a bit and then headed for Natural Bridges National Monument. Neither of these had been on my list but they both sounded really cool, and they did not disappoint.

Valley of the Gods is similar to Monument Valley - there are a number of "monuments", which are rock formations formed through erosion. 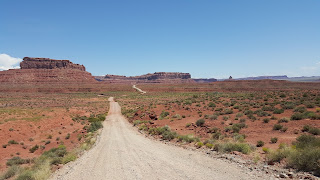 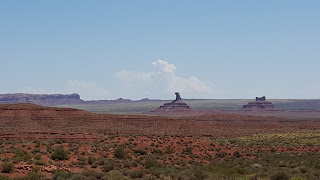 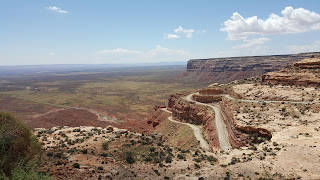 Natural Bridges was the sleeper hit of the month. I had never even heard of it until I got to Bluff and saw the road signs pointing in that direction, and I'm so glad I decided to check it out.  There are three natural bridges at the monument and a network of hiking trails that will take you underneath each bridge.  The best experience I had was hiking one of the trails. When I got to the bottom of the canyon, I couldn't immediately tell which way I was supposed to go (couldn't even see the bridge), and once I figured it out parts of the trail were pretty overgrown, but I kept going and eventually ended up on a mostly-dried riverbed underneath the bridge.  I had the place to myself, and was having fun testing out echoes.  I was just about to turn and leave when I heard "Hello" - I damn near had a heart attack, but it was just a ranger who had come down to take some pictures for the Visitor's Center.  He pointed out some pictographs that I had totally missed, and when I exclaimed how cool the place was, he told me that the coolest thing down there was actually under a tree, up an embankment and around the corner.  There I found a hidden archaeological site with some artifacts and a bunch of petroglyphs (pecked into the stone) and pictographs (painted on the surface of the stone). I never would have found this by myself. 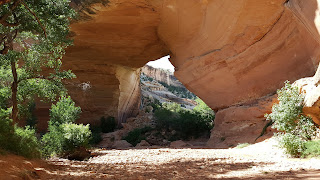 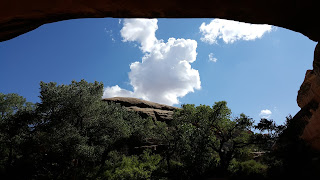 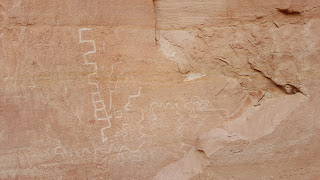 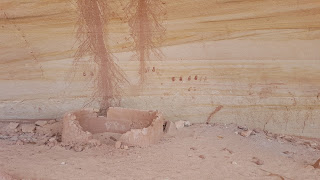 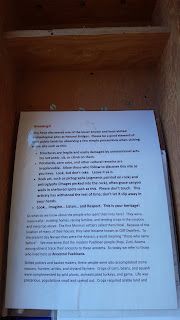 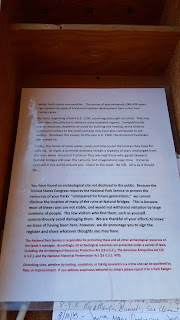 After Natural Bridges I drove back through the town of Blanding so I could get some groceries and then headed back to my awesome campsite at Sand Island.  I loved it - it was so peaceful and I had the river pretty much to myself.  Unfortunately, this was also the night when my water pump stopped pumping water.  I tried refilling the tank but I had just filled it, and water came spilling back out, so I just figured this was the next thing on my 1987 trailer I would have to replace. This did mean that I would be stuck at RV parks until I could replace the water pump - as long as I'm hooked up to "city water" (as those in the RV world call it) everything works fine - but without that connection I can't wash dishes, shower or even wash my face.  Those are deal breakers for me.  The next morning I would head out for Zion National Park.
Posted by honey badger at 1:33 PM