Dinosaur, Colorado is in the Northwest corner of the state, right across the Utah border. The name comes from its proximity to Dinosaur National Monument, which is so named for the mass quantities of dinosaur remains found in the area.  It's pretty remote - the nearest Walmart is about 45 minutes from town, and town is about 45 minutes from the location of the hang gliding launch.  Yes, I now measure civilization by how far from Walmart we are.  Read into that what you will.

To get to the hang gliding launch you actually drive through a good portion of the monument itself.  It's high desert, and there is no "civilization" in this area, but there is a LOT of wildlife.  Everyone had a hard time driving through without hitting any bunnies (the poor things were all over the road, jumping out in front of us at all times) and we saw many deer and birds as well...I saw a fox one night.  The launch itself is actually 4 launches along a cliff face at about 8,000 feet above sea level. There are two designated LZs, but they both kind of suck in their own ways, and it's an hour & a half turnaround just to take a sledder - the name of the game at Dinosaur is going XC.
Most of the pilots and crew camped out up top on launch, but my water pump still wasn't working so I checked into the ghost town - I mean RV park - in town.  Again, this place was pretty cheap and came with full hookups, but there were definitely tumbleweeds blowing through, mostly unimpeded by any structures.  I hooked up and went to registration, where I met up with a bunch of people I hadn't seen in months and received the first of many guilt trips for not camping out on launch. I also gathered a couple of people who were theoretically willing to help me change out my water pump, but in hang gliding terms it's not always easy to translate willingness into doingness...especially at a competition where everyone is on a tight schedule every day.

Although I had gotten a couple of foot launches at Point of the Mountain, I still wasn't what I considered to be current and confident, and Dinosaur itself was pretty intimidating to me, so I definitely wanted a practice flight in smooth air before the competition started.  I made the mistake of asking Terry how late in the morning the conditions were likely to be conducive to such a thing, and I could see his energy towards me change immediately.  He was now nervous about me, and the only thing I could do to change his mind was participate in the launch clinic with Ryan Voight.  Terry would not even discuss conditions with me; he made certain I talked to Ryan and set up a time for him to critique my launch. This was fine with me, as long as I wasn't going to be forced into a peanut gallery situation.  I tend not to get as much out of a clinic as I do out of one on one instruction because I get distracted by so many different viewpoints, I'm not able to think through every single one of them, and I end up frustrated and not retaining very much.

Saturday morning, I drove up to launch, caught up with several more people I hadn't seen in a while, and set up my glider.  There was a small issue with the sail, which Zac helped me fix, and then I got suited up.  I had assumed that there would be others flying, since the day before there were several people involved in Ryan's clinic. However, today there was only one paraglider pilot who flew long before I even suited up.  Hence, a crowd formed as soon as I started towards launch.  This, of course, compounded my nerves. To add to my crowd-related anxiety, as I walked up to launch, someone reached in and touched my hang strap.  I put the glider down and yelled, "What?!"  I couldn't believe someone would reach into my control frame as I was suited up and walking the glider to launch.  It felt disrespectful at a minimum - and since I didn't know who this person was or what the hell they were doing, it felt dangerous.  Turned out to be GW, who thought I had forgotten my secondary hang strap.  It would have been very dangerous to launch with only one hang strap.  Luckily, my primary and secondary hang straps are sown together, so that there is only one streamlined strap to hook into.  All was fine with my glider.

At this point, I took a moment to collect myself and crouched in the control frame of my glider, taking some deep breaths.  I looked out towards the launch and decided I wanted confirmation from Ryan that the exact spot where I intended to initiate my launch run made sense to him.  I called him over, told him I was getting more nervous as the crowd grew and asked him my question.  He showed me where he thought I should start, which did coincide with my own thoughts, so that was good.  I still hesitated, though, and he did a pretty good job of reminding me that this was just another launch and I already knew how to do it, so I should just do what I knew how to do.  Unfortunately, he did also tell me that I needed to show Terry I knew what I was doing, because he was a bit nervous about me.  That didn't help, although I do believe he meant well.  However, Ryan did something that I will always love him for, and that was getting rid of the crowd.  He told them all to go check out the food truck or something, and before I knew it, we were left with Ryan, Majo (who had agreed to drive for me) and her sister Roxy. This, I could handle.  I picked up the glider and had a nice, smooth launch.  I hit a few bumps on the way, but no strong lift, and my mindset was to take a sledder, so I continued out to the LZ.  I also knew that I didn't like the look of the closest LZ, the Snake Pit (really a pit, with a road directly down the middle) so I really wanted to make sure I made it to the Corrals LZ and didn't want to risk losing any altitude searching for thermals I might not hook.  I made it to the Corrals with about 700 feet of altitude, plenty of time to check out the wind direction and set up an approach, and had a decent landing.  Not perfect, but safe and sound.

As I broke down my glider, a couple of locals and some newly arrived pilots stopped by to ask directions or check out the LZ, and I had just finished packing up when Majo arrived. On the way back, we were talking and missed our turn, but found this incredible view instead: 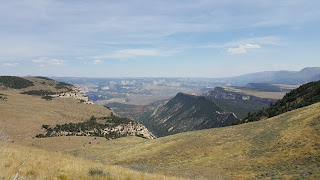 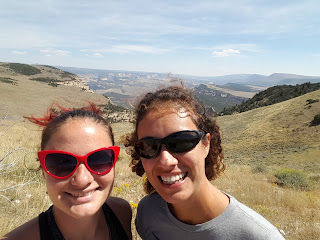 When we got back up top, a bunch of people made a point of complimenting my launch, which was a relief.  According to Ryan I had slightly popped the nose, so that gave me something to work on.  When I saw Terry later he said he hadn't seen my launch, but heard that it was good.  His entire demeanor towards me had changed once again.   I also got to talking to Tip back on launch, and he was thinking about entering the competition but hadn't yet signed up. Well, I was thinking that I really didn't want to compete, but I had signed up many months earlier and paid a much lower fee than the onsite fee.  I offered Tip my entry, and after changing his mind a few dozen times he finally ponied up.  While on the emotional roller coaster of Tip's decision, I had decided for myself that I was going to drop out either way, but it sure was nice to get my money back.  I find competitions to be stressful, and I didn't want to be stressed out - I just wanted to enjoy myself.

As the comp unfolded, I became more and more glad to have made the decision to drop out.  The weather was pretty crazy.  The first few days, there were several thunderstorms visible from launch by the time the launch window opened. Some were on or near course, while others weren't.  But you still had to launch with those storms in view, which did nothing to make me more comfortable flying this site.  And unlike aIerotow comps, if you sunk out you would be done for the day and you'd still have to wait for your driver to pick you up and bring you back up.  A bunch of people ended up with stories of landing in gust fronts or in backcountry, and Cory has some great video of a little hail storm he experienced one day after landing & packing up.  He had just packed up his glider and run into a nearby barn when it started hailing - in the video it looks like snow.  It was a cool experience to be there, but I'm glad I didn't have to make decisions about whether to fly in those conditions. The last few days of the comp were blown out or rained out, so there were only 3 valid competition days out of 7.

Even though I wasn't flying, I had a great time with old and new friends.  I played badminton for the first time in years, which brought back great memories of my time on the varsity badminton team during my senior year of high school (really).  I went exploring, both along the rim and down in the canyon.  And I got someone to help me change out my water pump!  As it happens, I think the problem was with the placement of the intake hose - it was preventing me from getting the tank full.  I thought it was full because it wouldn't take in any water, but really it was empty. In any case, by Wednesday I had moved my trailer up top to a site with a beautiful view right on the edge of the cliff.  It was way off level, but my next door neighbor Fred sacrificed some time and a couple of pieces of firewood to help me level it out.


AND...WE GOT TO TOUCH REAL DINOSAUR BONES!!  The Quarry Exhibit Hall at Dinosaur National Monument is worth a trip, if only for this reason.  It's a real excavation site, which has yielded a number of skeletons now on display at various museums around the world.  At some point they stopped excavating and built a glass enclosure, which now serves as an exhibit hall where you can see actual fossils still in the sediment...and in a few places, you can actually touch the fossils.  These are real, ancient bones, not replicas.  Where else can you touch actual dinosaur bones?  Pretty damn cool, in my book.