Each of these three national parks could easily support a week of exploring, but I only had one week in which to drop in on each one of these on my way to the Point of the Mountain.  It continues to amaze me how much beautiful terrain is concentrated in the state of Utah - each of these places is incredibly beautiful and I feel grateful that they've been preserved as national parks instead of being developed into suburbs.

When I finally got to the RV park just east of the entrance to Zion, the woman at the desk exclaimed relief that I'd finally made it.  I didn't go into the story, but I admitted that it had been quite an experience.  She made quick work of checking me in and even made it clear that she felt bad about putting me in a back-in site, "because she knew how she would feel in that situation".  Once she heard I'd been living in the trailer for a couple of months at that point, she calmed down quite a bit.  The best thing I can say for this place is that it's just a few miles from the east entrance to Zion - not much in the way of amenities, including almost no cell service and no wifi on the side of the street where the actual campsites are.  The location is also not as convenient as one might think, because in order to get to the Zion Visitor's Center and the shuttle that takes you to most of the hiking trails and the "must see" parts of the park, you have to drive several miles along switchbacks and through a tunnel that was built in the 1920's.  This makes it a real procedure to drive through with an RV, since traffic has to be stopped and can only flow in one direction at a time in order to allow oversized vehicles to move through.  All services are also on the west side of the park, so grocery shopping, etc required me to drive all the way through the park.  But, I hadn't been in any state to do much research before I got there, so the price was pretty cheap and I just booked it.  Overall it wasn't bad, but I might not stay there again.

Zion itself was just as cool as everyone had told me.  I stayed two nights, which really meant I had one full day of exploring.  The Narrows sounded so cool and I would still really love to do it, but it also sounded a bit dangerous as most of the way you are actually hiking in the river - there is no trail, per se...and I just wasn't up to the risk at that point.  So, I chose to hike to Angel's Landing, which is one of the iconic viewpoints that you'll see when most people post pics.  This was pretty tough, mostly because I am not a morning person and by the time I hit the trail it was solidly midday.  Very little shade and midsummer desert temperatures combined with a high-ish altitude made this pretty rough.  But I made it.  There is a point at which most people stop and rest - it's a lookout of sorts, with a big rock with partial shade.  I stopped here and watched as people began the climb up, and debated for some time whether to do it or not.  I was tired, but was I really too tired to not get to the top?  I love getting to the tops of things.  And the hike up to that point, while not easy, had been kind of boring.  It's a smooth packed-dirt trail that feels almost paved, with a lot of switchbacks and not a lot of viewpoints.  So I finally got off my ass and started climbing up.  To say I'm glad I did would be a gross understatement. This was one of the coolest hikes I've ever done.  The scenery at the top was just a bonus - I was using my entire body to pull myself up and over and around boulders (there are chains to grab onto at the hardest parts), walking along ridges with steep dropoffs on both sides, and just generally having an incredible time.  I stopped a bunch of times to catch my breath but always kept going and was rewarded with an incredible view at the top.  Honestly, climbing back down was just as much fun as going up. 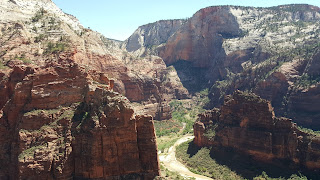 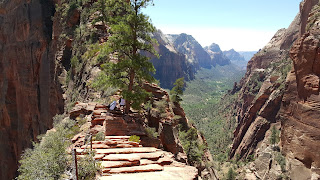 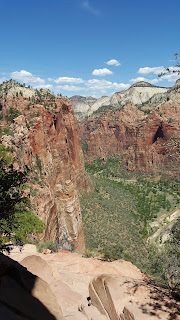 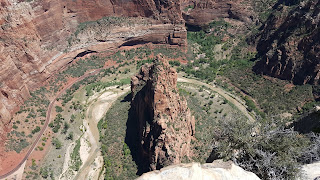 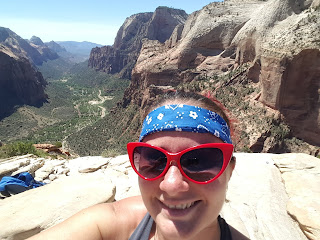 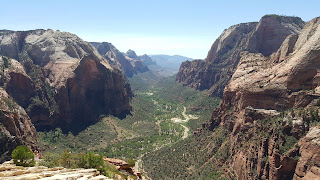 Zion is also where I discovered the Polygamy Porter.  Everyone talks about "Utah beer" as this weak, horrible beer, but these guys know their way around a porter.  I drank this stuff for the next month or so as I hung out in and around Utah.  I also did a little research - the line on Utah beer is that it can't be more than 3.2% alcohol, which sounds very low.  However, that is 3.2% by WEIGHT (ABW).  The entire rest of the world measures alcohol content by VOLUME (ABV). 3.2% ABW equates to 4.0% ABV.  Still not strong by any measure, but more in line with, say, a light beer.  This ends your beer lesson for today.

I left Zion on Tuesday morning, 8/18 and debated whether to stop at Bryce Canyon National Park or not.  I was running out of time if I wanted to get a full week at Point of the Mountain, but I had heard great things about Bryce.  And since it's basically in the middle of nowhere, I figured that if I didn't do it then I might never do it.  So I did.

I got to the RV park in the middle of the afternoon and went searching for a new sewer hose.  While at Zion, I had discovered that my hose had tiny little pinprick holes in it, which just let little tiny streams of water through.  This didn't worry me when I was draining the grey water tank - that's just shower & sink water and might smell, but generally is not toxic.  However, this is disastrous when emptying the black water tank.  I didn't need to drain that tank just yet, but as with people, when you gotta go you gotta go...so I didn't want to be stuck with a full tank and no hose.  However, I really wanted to just replace the one I already had, which connected to my trailer and the sewer donut really easily and cleanly...and apparently Bryce, UT is not the place to be picky.  So I walked away from the super helpful chick at the local hardware store and went exploring.  I still had a bit of daylight left, so I hopped on the shuttle into the park, got off at the furthest point and started walking back.  But not before I took a couple of pics from the end. 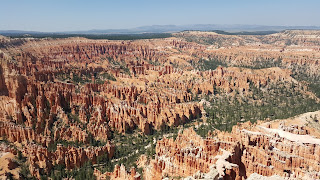 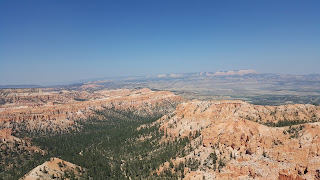 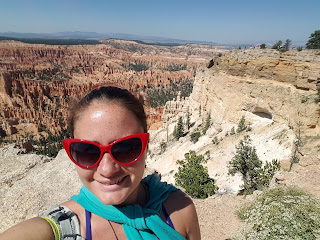 Bryce is my favorite national park to date.  I love the rock formations, and this is where I learned how they're formed - freeze and thaw. During the day, water gets into cracks in the sandstone.  At night, the water freezes and expands, widening the cracks.  The next day, the water melts and drains, but more water gets in to the now bigger cracks.  This water freezes and expands the cracks further, melts the next day, and the cycle repeats until the cracks are big enough to break off a piece of the rock.  In this way, all of the rock formations at Bryce are constantly changing.  Maybe that's why I like them so much, because I can relate so well.  Change is the only constant.  And they are beautiful as they are changing - even more so because they are changing.  We don't know when or how Thor's hammer will fall to the canyon floor, so we have to appreciate it while it's here.  And who knows what it will look like afterwards? It might be something even more beautiful. 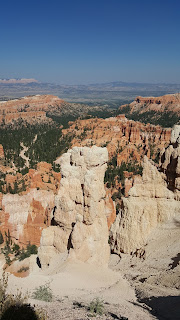 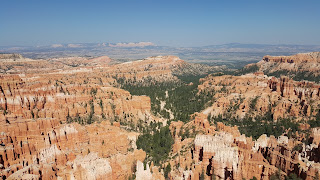 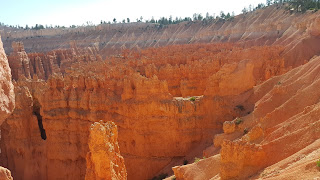 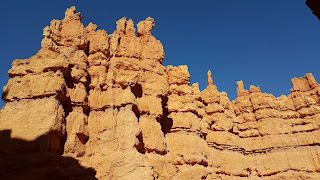 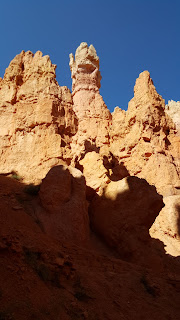 I was also really happy when I realized that the Grand Staircase - Escalante National Monument is something you drive through, rather than go to.   I didn't have time for another full stop, but I was quite happy to drive though it, stopping to take pictures. 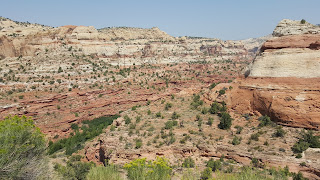 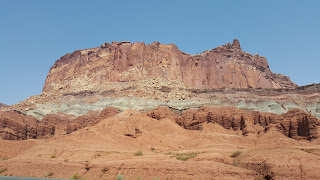 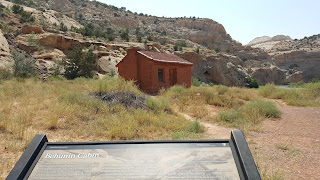 Next up - Arches National Park.  I pulled into the RV park just North of Moab, started cranking up the jack on the front of the trailer so I could unhook it from the car, and it fell.  Just fell.  It was completely broken, in that it is designed to lift things and it would no longer do so.  I didn’t know how I was going to get the damn thing unhooked. I went back into the office, felt a cry coming on and went straight into the bathroom.  Got myself under control, went back out and asked for some help.  The old guy managing the place and his young nephew helped me get unhooked using a long crowbar and some wooden boards.  We balanced the trailer on the rinky dink jack that came with the car so that I could at least move the car, and they gave me a couple of ideas of places I might be able to buy a new jack.  Thankfully, this time it was actually a simple repair, although I had to wait till the next morning for the stores to open.  I did have to go back and return the first jack I bought – I had thought it would be best to go with the heavier duty version, but it was too big to fit through the little hole on my trailer.  Once I had the right size, it was just a matter of unscrewing 3 bolts.  Simple, right?

Wrong. These bolts were painted on – I’m pretty sure they were the original bolts from 1987.  Took me forever to get them moving.  Eventually I was able to get two of them off, but the third one was completely stripped.  Once again, one of the maintenance guys came to my rescue. He ground it down and then popped it through with a chisel.  The frame ended up just slightly mangled, but I was able to screw in the 3 new bolts on the new jack and I was back in business.  And I still had plenty of daylight left to head over to Arches.

It was pretty overcast, so the pics may not be incredibly jaw-dropping, but the experience was extremely cool. I especially liked the walk to Sand Dune Arch.  It's all sand, like walking on a beach, and the arch itself is completely hidden until you get right to it.  There were also countless arches in process of erosion - you can clearly see how they're formed. 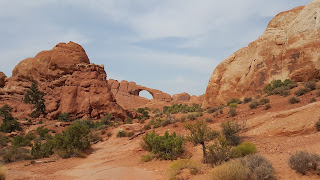 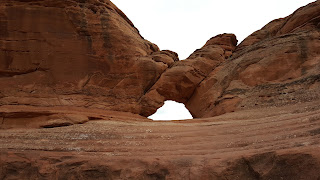 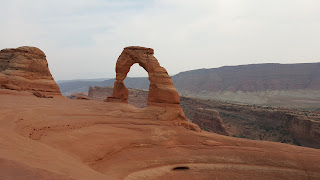 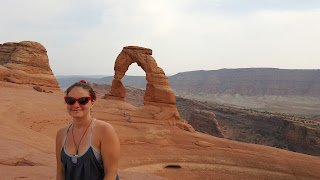 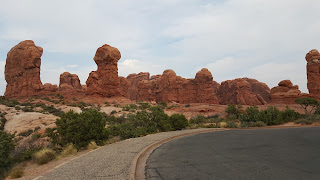 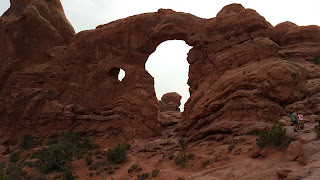 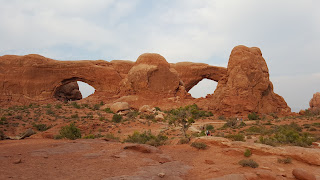 Friday morning, after one last breakfast in Moab at the Jailhouse Cafe (excellent bacon), I headed out to Point of the Mountain.
Posted by honey badger at 3:55 PM