The morning of Saturday, June 27th, I woke up still pretty sick. My voice was still unrecognizable, but I'd had my first night of actual sleep in almost a week, so I felt strong enough to drive a couple of hours. I figured I could always pull over and rest if I needed to, but Devils Tower (due to an uncorrected clerical error, there is officially no apostrophe in the name) in Wyoming sounded really cool and I thought it was doable, even in my weakened state...and I had to leave the campsite I'd had for the past couple of days no matter what, so I figured I may as well move on.  I'd had enough of South Dakota.

I am so glad that campsite was booked.  The drive went really well, and I was excited to see the Wyoming landscape.  It's so energizing for me to be in such beautiful places.

I decided to stay at the Devils Tower KOA because it was right at the base of the monument, and the other options were all a solid 30 - 40 minutes away.  Since I was sick, I didn't want to deal with a commute.  This turned out to be my favorite campground so far.  I could see the Devils Tower itself directly from my campsite, and since the movie Close Encounters of the Third Kind was filmed onsite, the campground actually shows the movie every night!
I thought about taking a nap - I felt that the responsible thing to do would be to take a nap.  Or to get some work done, since I'd been slacking all week due to the brain fog & coughing fits.  So, I went up to the gate and bought an annual Interagency Pass, which gets me into any National Park/Monument/etc that charges an entrance fee for the next year.  One of the smartest things I've done so far.  And then I drove up the hill and spent the afternoon walking the 1.3 mile trail that circles the base of Devils Tower.  The place is so cool - it rises, almost vertically, 867 feet from its base (the summit is 1,267 feet above the valley).  Usually, there would be climbers all over it, but no climbing is allowed during the month of June because of the significance of the Tower as a sacred site to many native groups. I found the energy of the place to be very positive and I was in awe of this crazy structure.  It's made up of a bunch of hexagonal columns, formed by cracks caused by the cooling & shrinking of the rock. 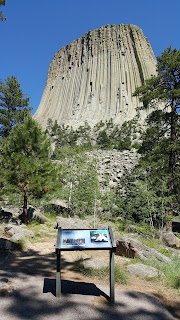 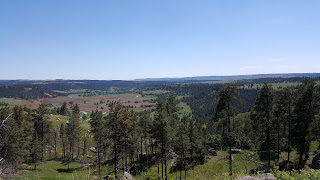 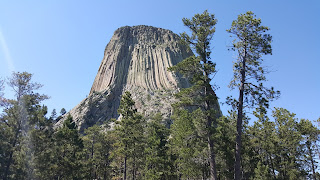 I was somewhat amazed that I made it all the way around the base.  I was pretty tired by the end, but once I passed the halfway point (very thoughtfully marked) I was obviously locked in.  I did take a quick nap, but I was excited to watch the movie in the place where it was filmed, so I headed over.  I made it about halfway through the movie when the coughing got the better of me, so I ended up watching the end of the movie on my phone.  Still a very cool evening, and far better than I would have had if I had stayed where I was instead of pushing forward.

The next couple of days were devoted to getting to Glacier National Park.  By this time, I had a plane ticket to NY booked for Thursday July 2nd out of Missoula, so now I had a schedule to keep.  I had a feeling that I'd end up skipping Glacier if I didn't get up there before I went home, and I really didn't want to skip Glacier.  I liked the RV park in Billings, which had mountain views and a nature walk down to the river...the one in Missoula was not so nice since it was right in the city and really felt like an actual trailer park in the city.  But the drive was absolutely gorgeous and I was loving life again. 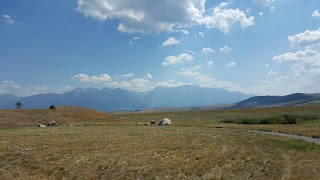 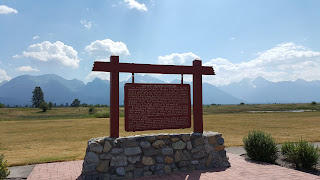 I checked into a campground...didn't love this one, either, once I found out that no showers are allowed after 10pm and the laundry room closed at 8pm.  This meant that I really had to be careful about how late I stayed at the park.  And it wasn't even fully dark by 10pm, so I found these rules to be completely ridiculous.  Another lesson learned.

Glacier was incredible, although I would have much preferred to be hiking instead of driving.  I drove the entire Going to the Sun Road, which is just a slew of breathtaking
scenery.  I was also able to explore a bit of Many Glacier.  The weather on the Eastern side of the park was kind of crappy - overcast with a low cloud base, so that many of the peaks were enshrouded.  Still very beautiful, but harder to get those "wow" pics. 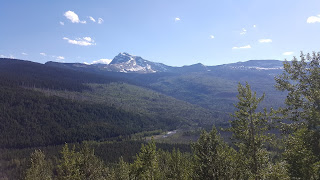 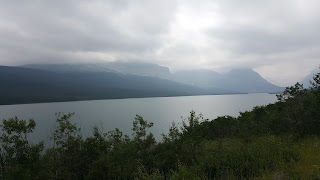 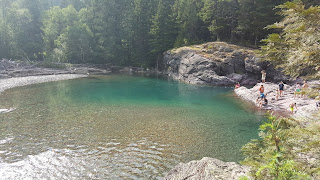 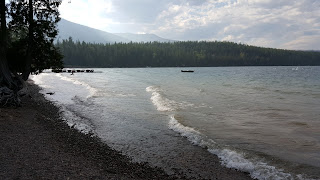 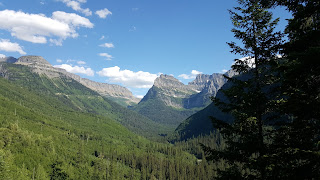 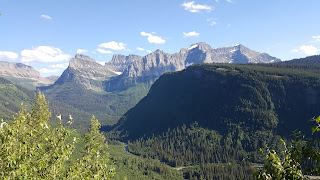 After two days of exploring via car, I had to get myself packed up for the trip back to NY, so I made sure to get out of the park by 8pm (still nowhere near dark) and back to the campground to find and pack everything I would need to go flying, attend a wedding, and just hang out and catch up with all my peeps.

The next morning I drove down past Flathead Lake again, past Missoula to leave my rig in Florence, MT and hop on a flight back to Newark, NJ.
Posted by honey badger at 7:06 PM