Maybe You Can Go Home Again

It was hard to leave Glacier, but somehow I managed to get myself and the trailer down to Missoula on the morning of Thursday, July 2nd.  I was pretty happy to be driving past Flathead Lake again.  When I drove past the lake on the way up to Glacier, I was afraid I was going to roll both truck and trailer into the lake because I was having so much trouble keeping my eyes on the road.

In yet another example of how awesome people can be, my buddy Matt spoke up and mentioned that his parents live outside of Missoula.  Being good people, they were happy to give me a place to crash, as well as a place to leave all my stuff while I flew back to NY - all while they continue about a couple of the busiest lives I've encountered recently.  Craig & Barbara were out of town on the 2nd, but I drove to their house and dropped my stuff, and then I was driven to the airport by a friend of theirs.  All this was arranged by two people I had yet to meet, who knew very little about me except that I was their son's hang gliding buddy.

Thursday was a full day of travel - I left Columbia Falls, MT around 7:30am MST to drive to Missoula, spent some time hanging around MSO since my initial flight was delayed, miraculously not only made the connection in Chicago but had time to eat dinner, and landed at Newark a little after 11pm EST.

Spent the night in a hotel in Newark, and spent Friday traveling up to Hang Glide New England in New Braintree, MA.  This was a day full of logistics.  First, I Ubered to the NJ Transit station to hop a train to Penn Station.  Ended up on an Amtrak train, where I narrowly escaped paying an extra $68 instead of the $5 NJT fare.  Fun times.  Then, I took 2 subway lines uptown & across to the east side to Grand Central to get the train up to Bridgeport, CT.  My cousin, Donna, met me at Grand Central to drop off a tent/air mattress/etc so I'd have a place to sleep for the weekend.  My "hang gliding husband" Big Mike met me at the Bridgeport station, and after a quick stop at his house to pick up his stuff and my glider, plus another stop at one of the more well-stocked beer & wine emporiums I've had the pleasure of visiting, we were off to MA.

We arrived at Hang Glide New England just in time to see a bunch of the usual suspects breaking down their gliders.  Nick Caci offered to let me fly his glider since it was already set up, but by that time I was pretty beat from all the travel, so we just set up camp, ran a couple of errands and inhaled some Mexican food.  The next day was pretty rainy and cold, so we drove to Sturbridge to see a movie (Ted 2 - super crass but very funny) and eat and drink some more. Donna met up with us just in time for the movie and hung out for the rest of the weekend.

Sunday was a beautiful day.  We met some new people and caught up with a bunch of old friends.  I was the second one to launch and I got a great flight.  However, I was flying my Falcon, which I hadn't flown in over 3 years, and I was borrowing a vario because mine was dead.  Even though it's theoretically an "easy" glider to fly, the Falcon has no glide to speak of, so I was extremely conscious of the drift I was experiencing as I thermaled up - and what a beautifully thermalling glider it is, I must add.  Basically thermalled itself.  I was also a bit nervous about the landing, but I had a great landing - probably could have stuck it, but I was ready to run, so I took a couple of steps and the glider settled right onto my shoulders.  Before I had unhooked my harness, I was met by Gary, who wanted some pictures for his portfolio, and I had the special treat of seeing Marilyn, whom I almost never get to see even though I run into Rhett every few months.  Overall, it was a great weekend - it was so awesome to see everyone, and I can't thank Mike and Donna enough for carting me around and making it all happen. 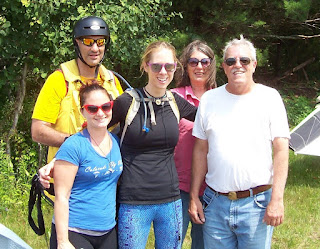 Donna and I drove home to her place in Copiague, Long Island, in a relaxed and happy state, and took it easy on Monday, just catching up on work, so that we'd have our energy for Tuesday.  On the morning of Tuesday, the 7th, Donna and I drove out to Yaphank to pick up my favorite (and coincidentally, only) niece Julieanna and took her to Adventureland.  This is a tiny little amusement park with 2 roller coasters - and I'm using the term "roller coaster" very loosely.  However, Julieanna isn't bothered by the lack of roller coasters because she...won't...go...on...them.  This revelation shook me to the core.  I had to question whether we're really related.  By the end of the day I was pretty impressed, though - in the morning she didn't want to go on any water rides OR into the haunted house, but by the end of the day she was dragging me into the haunted house and asking if we could "get more wet".  I'll give her a pass on the roller coasters...this time.  The highlight (or lowlight?) of this day, however, was yet to come.  We happened upon a live musical performance, where we got to see Lil' Dawg performing live.  We were mesmerized, the same way you're unable to look away from a train wreck.  I feel I would be remiss if I didn't share this experience. This child has his own mascot.
https://youtu.be/bwX-NhYMUKo

Wednesday was another work day, but I did manage to grab dinner with my mom on Long Island.  Thursday was a huge day - super busy and filled with so many of my favorite NY things and people.  Donna drove me to the train early in the morning so I could get my hair did by the only person I trust (one of my longest relationships at 17 years so far). Then I skipped over to Manhattan for one of THE best bagels at Ess-a-Bagel (seriously, no other bagel comes close). Got my nails did for the wedding on Saturday, then over to Sala for bacon wrapped dates, sangria & girl talk with my friend Aimee. Walked home in the rain, stopping at a natural foods store for some hard-to-find-outside-of-big-city items like kombucha & ghee, and ended the day relaxing in style at my friend Vanessa's place even though she was out of town.  I was so tired and happy at the end of that day.

Friday I mainly ran errands, worked, and caught up on the blog, since I had another full day ahead of me on Saturday.  First, I did another version of the NJ-NYC-LI journey utilizing various trains + Uber, checked in at the Holiday Inn in Plainview and prettied myself up for the wedding of my good friends Natalie & Brian.  (I have to give another shout-out to Big Mike and his wife for clueing me into Rent the Runway - I really didn't have any desire to purchase a new dress, but I also didn't want to wear the same one I've worn to every other function in recent history.  I got an awesome dress for a discount-store price, and shipping both ways was quick & easy.  I'd recommend it.)  Headed over to the wedding, where I caught up with a slew of other people I'd missed for too long.  The wedding was beautiful - Brian's sister officiated, Nat's friend Steven broke down in the middle of singing Unchained Melody, the two moms lit the unity candle to join their families...it was great.  The reception was super fun - there was a good selection of beer and a carefully curated playlist for the DJ.  And so many of those in attendance are like family to me, it was just wonderful to spend time with them again.
Donna picked me up on Sunday and we actually went to the beach.
I hadn't been to the beach in too long to remember, so it was pretty cool, even though I picked a spot next to some kids who ended up shattering a beer bottle just inches from my leg...once we moved further up the beach, it was quite relaxing.  Monday morning I had to do laundry, but we managed to squeeze in a trip to the dock by the bay, and yes we sat on the dock of the bay...but really there were no ships rolling in.  It was a really nice peaceful place to meditate, though.  And then Donna dropped me off at the train again to start my trip back to Missoula.

I landed after 11pm MST in Missoula, and Matt's dad was there to pick me up at the airport and bring me home to set me up in my own guest suite in the basement of their beautiful house in a valley in Florence, MT with mountain views from both front and back. I mean, it's all right, if you like that kind of...gorgeous, naturally beautiful kind of place.  And I happen to LOVE that kind of gorgeous, naturally beautiful kind of place.

As great a time as I had at home and as much as it warmed my heart and soothed my soul to catch up with everyone on the East coast, I notice that I feel more at home in the West.  I was exhausted when I landed in Missoula, but as soon as I stepped outside of the airport, I felt like I could breathe more easily.  The air smelled so good - it's one of those things that you don't realize you're missing until you experience it again.
Posted by honey badger at 12:35 AM