As soon as I stepped out of the Missoula airport late on the night of Monday, July 13th, I noticed the difference in air quality.  The air smelled...good.  It was such a change from what I'd become accustomed to in NY, without even realizing that I had be come accustomed.  Matt's dad Craig picked me up, we went to meet his wife Barbara at her job and then went on a pilgrimage to find eggs past midnight in and around Missoula, MT.  They gave me the basement in their huge house and I passed out.

Tuesday morning, I was up at 8 for breakfast prepared by Craig, using the eggs we finally found at a gas station the night before, with Barbara fresh off her overnight shift. After breakfast I worked for a while and then set about finding a flying contact. A bunch of people tried to give me contacts...when Joel mentioned that one of his guys owned a brewery I jumped on it.  Stopped by the brewery, had a beer & some food & inquired as to the whereabouts of the owner.  Had a nice chat with Paul and decided to possibly check out Sentinel that evening & possibly fly Tarkio on Wednesday.

Since Sentinel is a H-4 site due a restricted LZ, and I'm a H-3, it was not in the cards for me to fly there on this trip.  However, Mt. Sentinel is also a popular hike for Missoulians - there's a steep zigzag path up to a giant concrete "M" and then another trail up to Hellgate Ridge and, eventually, the summit of Mt. Sentinel.  I was itching to get hiking, so I went over to the "M" trail - it's pretty freaking steep but it rewards you with great views of both the city and the mountains across and down the valley.  I made it about a half mile from the top, but I had a monster blister forming on my left heel and I was already out of water, so I turned around and went back down - what a quadbuster!  My legs were sore for days - it felt awesome.

On Wednesday morning Paul texted to say that it would be an evening flight, if at all.  I spent the better part of the morning fiddling with my vario, which refused to start even after replacing the batteries with both alkaline batteries and new rechargeables.  I was pretty nervous about flying a new site and foot launching, so the last thing I needed was to have to fly without a vario.  But alas, a call to Steve Kroop at Flytec (the manufacturer's US dealer) confirmed that I would have to ship the vario to Florida for service.  Luckily, Paul had a spare to lend me.  What a guy!

Wednesday afternoon I met Paul, Josh & Paul at Paul's house in downtown Missoula.  We loaded up two hang gliders & two paragliders and set out for Tarkio, about an hour west of Missoula.  What a beautiful site (and sight).  Incredible view.  Basically a cliff launch.  Both Paul & Josh gave me some pointers on the launch and where to find lift, and after inhaling a Kind Bar I suited up.  I got a few blips on the vario, but felt I wasn't sure which way to turn to stay in the lift, so I tried all three areas where the guys told me they normally find lift.  I wasn't able to get established in anything, so I headed out to the LZ for a nice landing.  I looked up in time to see Paul launch, and continued breaking down my glider.  Not long later, I saw Paul's glider over the LZ, coming in to land near me.  I told him he didn't have to land just to make me feel better, but he insisted he didn't...which, of course, made me feel much better. We hung out for a while watching Josh tow his paragliding student Paul with a scooter tow system, and in the meantime, Bill and his wife (the owners of both the launch and the LZ) came by and we had a lovely time chatting with them.  I felt very comfortable and peaceful in that valley.

Thursday the 16th I worked for a couple of hours and then I needed to get out of the house.  Craig and Barbara had just gotten back from a motorcycle ride into Idaho to Lochsa Lodge, and Craig thought I'd really enjoy taking the same ride (in my car, of course).  Since this was not the first time I'd been told about the beauty of US 12, I figured I had to check it out. Well, I was not disappointed - the road not only parallels the Lochsa River but runs right along its banks for a while.  I had a delicious salad at the Lochsa Lodge and turned around, stopping at a couple of places I had skipped on the way out, including a cedar grove and a nice meditation spot on the riverbank. 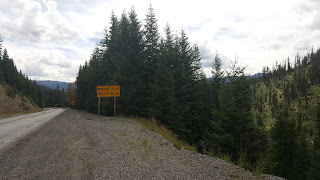 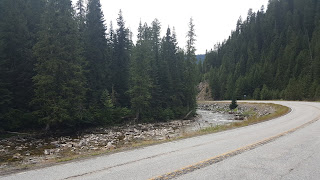 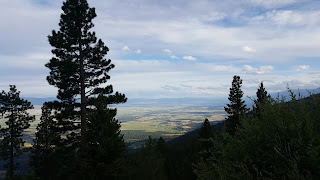 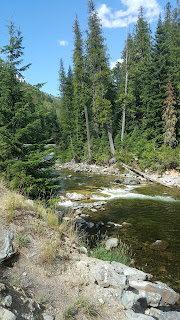 I had planned to be moving on by Friday-ish, but a favorable weather report for Friday had led me to extend my trip.  Well, wouldn't you know it, but Friday morning Paul wrote to say the weather looked like crap for flying, both Friday and Saturday.  I had already promised to feed the dog for Craig & Barbara, so I stuck around till Saturday noon, mostly just working, doing laundry and getting myself re-packed into the trailer for the next phase...Colorado. Quite possibly the love of my life.