Tom Galvin was out of town when I got to Pagosa Springs, but I found a great private little campsite off of Buckles Lake Road south of town and had my first two nights of official boondocking.  It felt so awesome to finally be doing something I had been wanting to do since before I started out on the road.  I had thought that I'd have all that stuff figured out before I got on the road, but I spent so much of my time at Quest getting other things in order that it just never happened.  And since I didn't want to sit around forever until I was 100% ready (I didn't really think I'd ever be 100% ready) I just decided I'd figure that stuff out on the road.  Well, getting sick with bronchitis really slowed my research efforts to a standstill.  So it was really awesome to run into someone who not only knew how all that stuff worked, but was willing to spend the time to show me. I'm pretty sure he thought I was a complete idiot, but in this case it was true, so no hard feelings.  It was such a wonderful feeling to be in the middle of the woods with no neighbors and actual nature all around me.  I was a little worried that I'd have some kind of wildlife encounter, but I never did.  And I loved sitting on my front step and staring at the moon through the trees. 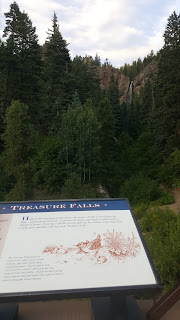 Now, I will admit that I had my doubts about boondocking.  I was afraid I would get stuck on some narrow dirt road with no room to turn the trailer around and I'd be totally screwed.  I was afraid that I wouldn't be able to get the fridge working, or that the water pump wouldn't cooperate and I'd be left without a shower.

So, on my way to finding this awesome, private, FREE campground I almost turned off at a couple of different RV parks.  There were at least two that I aborted because I didn't like the look of them - too crowded, not enough trees, too close to the highway.  The third was call "Last Resort" and it must have hit my emotions - it was late and dark and I was tired - so I turned down an unlit dirt road toward this place.  Well, I never found it because the only sign actually looked like the entrance to a private house and I didn't want to make the mistake of barging into someone's driveway with the trailer and then have to back it up in the dark. So I turned around on the dirt road.  It was wider than normal at this point since it was a 3-way intersection, but still not big enough for me to turn around without backing up.  Since I didn't have an audience I just went for it.  And I jackknifed.  Just a little.  I heard a noise as if I'd hit something metal behind the trailer but I didn't see a signpost or anything. I had a brief moment of panic, but I calmed myself down and eventually figured it out and got the hell out of there.

Even though that experience sucked, it made me a little less scared about traveling into the woods on some old dirt road looking for a campsite, and once I found Buckles Lake Road I drove the whole 7 miles, checking out every single campsite to make sure I got the best one.  Maybe I was a little hypoxic as well as tired.

Anyway, I found a great campsite - big and circular so I could pull around and not have to back up at all.  But when I went to unhitch, I noticed that the little rod & clamp that holds the propane tanks onto the tongue was out of place.  Instead of holding the propane tanks securely in place, it was laying between them as if someone had gently placed it there.  This is not normal.  This happened when I jackknifed.  Holy fuck.  How do I fix this?? I can't travel again without securing those tanks. I got myself settled, got the fridge turned on and went to bed.

Monday morning, after a great night's sleep, I went into town for breakfast and to do some work, and started looking for an RV parts dealer.  The closest one was in Durango, about an hour away, and they had the part I needed.  So, after breakfast I hopped in the car and went to explore Durango for the day. Not what I'd planned, but I wanted to see Durango anyway.  I got the part and went up to the Animus Overlook and did a quick little hike there - nothing much, but at 9,000 feet I was still not fully acclimated so I didn't want to push it too hard.  It should also be noted that the hour drive took about 2 hours, thanks to Colorado's road work initiative...every single road trip I took in Colorado took about 30% longer than it was "supposed to" thanks to road work that included single-lane roads and periodic road closures.  It's so great that they're taking care of their roads, but the delays were killing me.  At least when I got "home" I was able to take a hot shower. 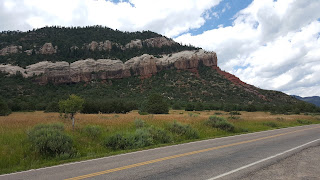 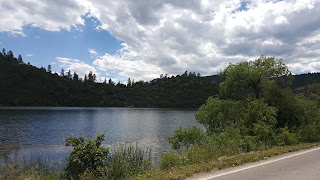 Tuesday morning I got up, went for breakfast and another little hike to Opal Lake.  This was a very pretty hike but a bit crowded for my taste.  There were climbs, multiple creek crossings, meadows full of wildflowers, and looming mountains as a backdrop for the lake itself...but on my way back I had to wait for scaredy-cats to cross the logs over the creeks...slowed me down a bit.  Then I got back to the trailer, repaired the propane tank holding tray, hitched up, and headed south towards Santa Fe.  This was a relatively short drive and I had plenty of time to make dinner and get the trailer cleaned up. 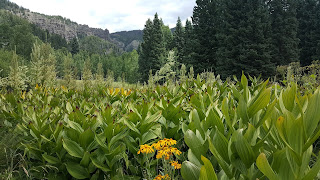 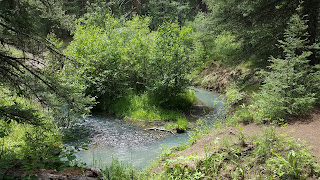 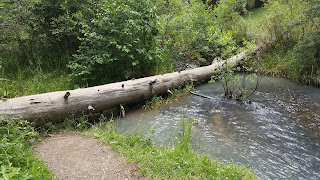 Wednesday morning in Santa Fe was rainy and cold, so I was pretty unmotivated to get out and sight-see.  Luckily, I had plenty of groceries to make my own breakfast and was able to just hang out in my little home and get some work done.  Later on I ran some errands, ate some barbacoa tacos and drove through Old Town Santa Fe.  Very cute but I wasn't feeling inspired to get out and walk around.  I guess I just needed a lazy day, so I watched a couple of movies and relaxed for the night.

Thursday the 30th I drove from Santa Fe to Roswell, NM.  Roswell is the town where a UFO supposedly crashed in 1947 and the military covered it up.  It's pretty interesting to read accounts from both sides - the UFO Museum downtown has signed affidavits from both civilians and military personnel that talk about the shrapnel and the "non-human" men they found.  According to the military, the wreckage was just a weather balloon...interesting that they'd be so concerned about a weather balloon that they'd confiscate all the pieces immediately.  And the little men were supposedly crash test dummies from parachute testing that was carried out in 1957.  Yeah. The UFO crash was in 1947, but the military's explanation is that people just got their dates mixed up?  Hmmm..

Thursday night I stayed at Bottomless Lakes State Park outside of Roswell.  Not boondocking, as this is a bona fide campground with electric & water hookups, but much cheaper and much prettier than an RV park.  And bigger sites, so some semblance of privacy - no one staring in my front door while they eat their dinner.  Not a bad place to stay for my last night before I head to Big Spring, Texas, a town that's known for its 5 prisons and for the annual hang gliding competition in which I'll be participating. 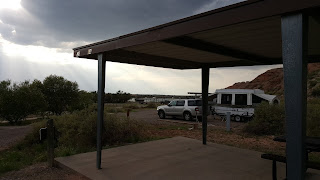 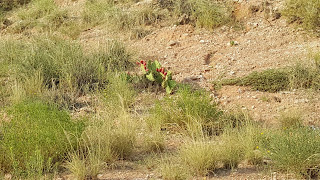 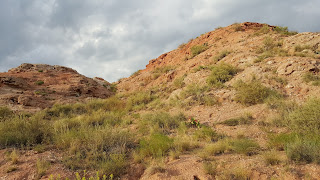